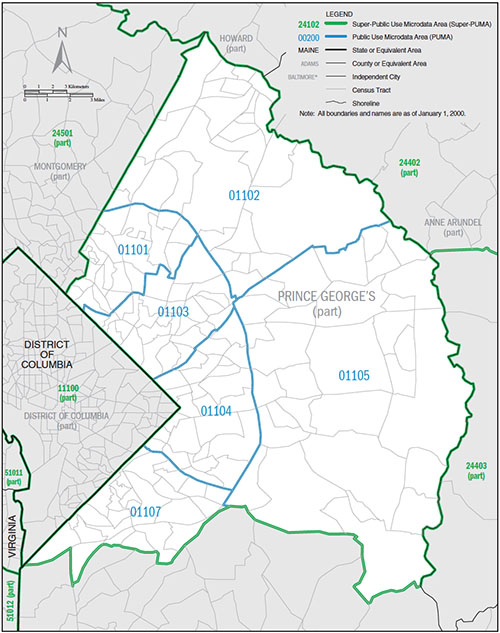 The synthetic is generated by expanding Public Use Microdata Sample (PUMS) data. PUMS can be downloaded free of charge from the US Census Bureau and contains detailed records of surveyed households. As SILO commonly starts the simulation in the year 2000, PUMS 2000 data are used to create a synthetic population. The spatial resolution of PUMS data are zones called PUMA (Public Use Microdata Area, as shown on the right).

PUMS datasets also provide information on persons of each household and the dwellings the households live in. By expanding the household records, synthetic persons and synthetic dwellings are created at the same time. Persons match the number of persons of the actual population. Dwellings, however, underrepresent the actual dwellings found in reality. This is because households were interviewed to create PUMS data. A vacant dwelling is not captured by the PUMS data.

Dwellings need to be allocated from PUMA zones to model zones. Zonal data are used to proportionally allocate dwellings to zones. Ideally, number of dwellings by dwelling type are used for this allocation. If such data are unavailable, zonal population can be used as a proxy for dwelling allocation. The home location of households is defined by the location of their dwellings.

The PUMS-based procedure described above creates a complete set of households, persons and dwellings. Jobs are created based on zonal employment data. Persons are connected to workplaces by drawing jobs located within the workplace PUMA zone specified for each worker in the PUMS data. To ensure that the number of workers in any given zone does not exceed the number of available jobs, "drawing without replacement" is applied for selecting jobs for every worker.

Currently, jobs are represented as independ jobs, and firms are not represented explicitly.

A synthetic population represents line by line every household individually.