The demography module simulates for the following person events:

These events are simulated in random order (and household relocation and dwelling events are mixed into this random order of events). All demographic events are modeled using Markov models that apply transition probabilities to select whether events happen or not.

All probabilties are currently hold constant over time. It is planned to improve SILO by adjusting birth rates and life expectancy for future years.

Birth of a child 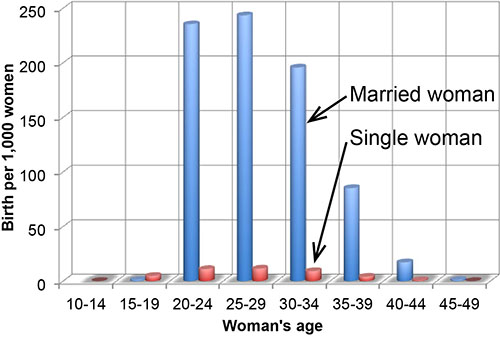 The model checks for every woman if she is going to have a baby this simulation period. The probability for having a child is driven by two variables:

The birth rates were derived from the U.S. Department of Health and Human Services: National Vital Statistics Reports, Vol. 51, No. 12, August 4, 2003.

Women not living in a relationship with a man are assumed to have a birth rate that is 1/10th of the averge birth rate. As 42% of all women in the base year are married, the birth rate of married women is multiplied by [(1 - 0.58 * 0.1) / 0.42 = ] 2.243 to ensure an average birth rate (average for married and unmarried women) found in the statistics is matched. 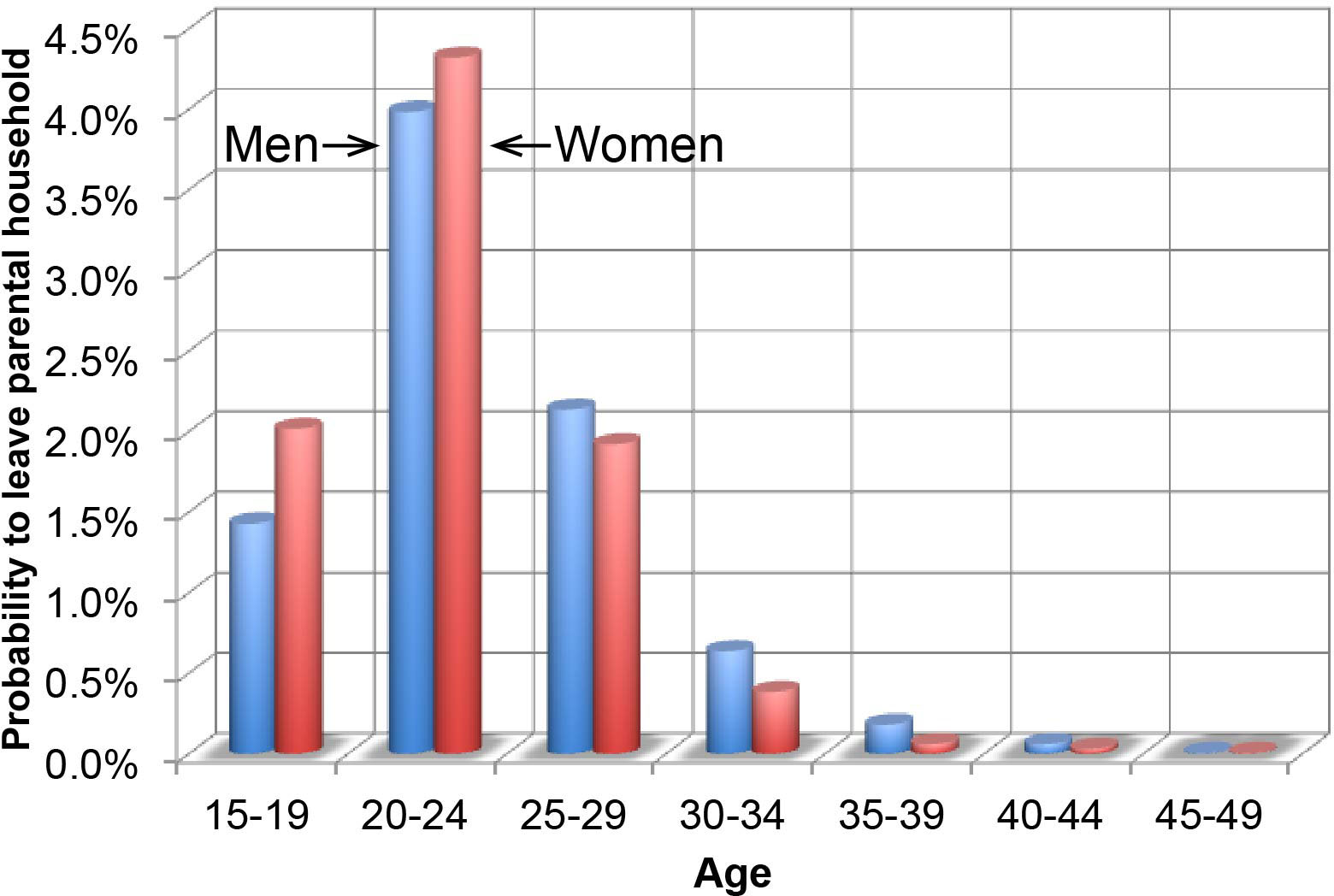 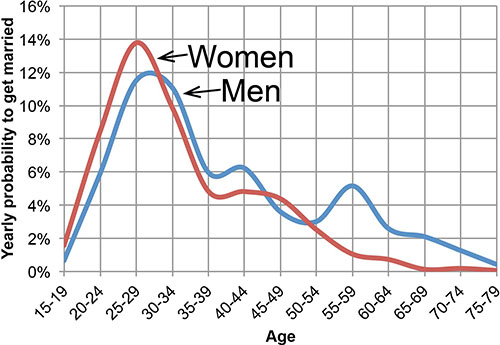 The probability to get married (shown in the figure on the right) is dependend on age and gender of a person. The model divides these probabilities by 2, as one marriage always affects the marriage status of two people. The model uses the observed probability to get married as the probability to either marry or cohabitate, which is likely to slightly underestimate the marriage/cohabitation rate. On the other hand, the model does not simulate a couple that is cohabitating already and decides to get married, as this would not induce a spatial move, and therefore, is irrelevant for the model. These two shortcomings are assumed to balance out, i.e. the marriage probability is assumed to reasonably represent the probability of a seperately living couple to move into one single dwelling, regardless of the legal status of their relationship. Data were obtained from the Census Bureau, where these data appear not be available anymore. The data are provided here in excel format.

Currently, the model only considers marriages/cohabitation between two people of the opposite gender. It is planned to expand the model to allow same-sex marriage/cohabitation. 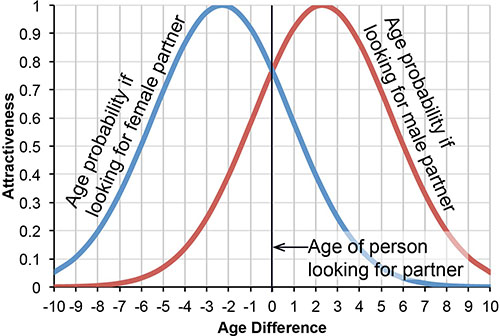 During the simulation, an unmarried person with the right age may decide to get married. This person will select a person of the opposite gender from the wedding market. Currently, only age is used as "utility" to choose a partner. It is planned to add income as another variable to find two partners who are likely to marry each other or cohabitate. Marriage statistics suggest that the average age difference between bright and groom is 2.3 years, with the man commonly being the older partner. A normal age distribution as shown on the right is assumed when selecting a partner. A 26-year old woman looking for a male partner will mostly likely select a man aged 28. It is possible that this woman selects a man ten years older than herself, though this is rather unlikely. 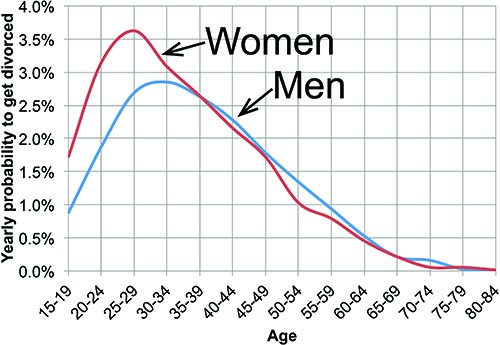 Every cohabitating couple may get seperated. Whether a couple is married or not and whether a married couple officially divorces or not is not of further interest for this model. Divorce probabilities are used to model every simulation period to analyze whether a cohabitating couple seperates and one partner moves into a different dwelling.

The graphic on the right shows the probability to get divorced subject to age and gender. Women have a higher divorce rate in younger years because more women than men of that age cohort are married. Data were obtained from the Census Bureau, where these data appear not be available anymore. The data are provided here in excel format.

A small share of workers may lose their job, and unemployed persons may seek for an open job.

Death is modeled by applying survival rates by age and gender. Survival rates where obtained from the World Health Organization (WHO) for the United States in 2000, which is the common base year for SILO. Survival rates become smaller as people age, and are slighly higher for women than for men.

This module handles changes to the population except household relocation.