Synthetic populations are used in transportation modeling when individual records are not available due to privacy data, lack of resolution or some attributes. Travel behavior of synthesized individuals is simulated to evaluate, for example, the effect of building a new shopping mall on the transport network.

In Germany, statistical information of the population is available online at the GENESIS-Online database and the 2011 Household Census. Data are aggregated at the municipality level (Gemeinden), county level (Landkreise), state level (Länder) or Nationwide (Bund). The GENESIS data base includes information on population, educacion, housing and environment, economic sectors, public finances or economic accounts; while the 2011 Household Census describes population, households, families and dwellings. 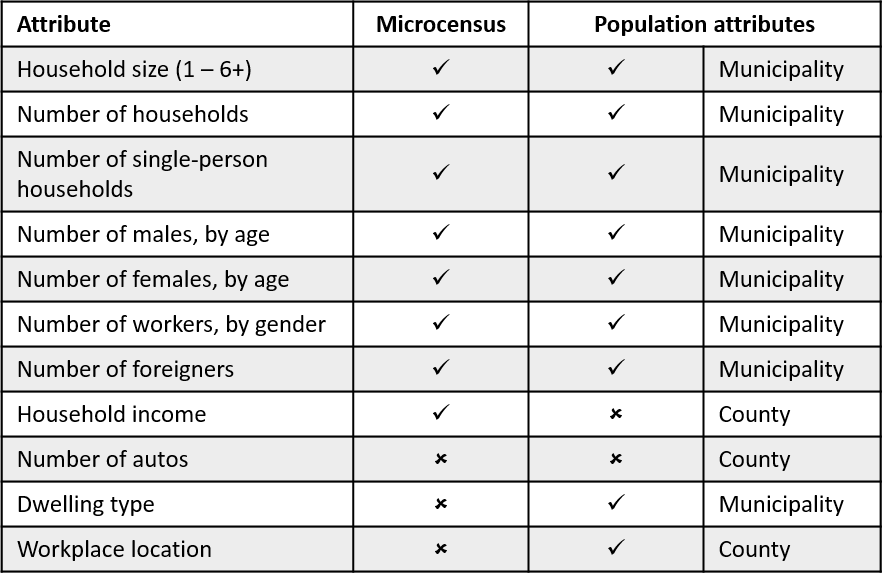 Control attributes must be included on both databases and have transferable categories, which can limit the number of attributes to match. In some cases, total population attributes are not aggregated at the same resolution. Based on the available data, we use 29 control attributes at the municipality level.

The synthetic population is generated using Iterative Proportional Updating (IPU). This procedure was developed by Ye et al. (2009) and it was expanded to accomodate controls at multiple geographic resolutions by Konduri et al. (2016).

The IPU procedure calculates a set of weights of each one of the microdata records in an iterative approach. It is capable of closely matching household-level and person-level marginal distributions at the same time; and it can accommodate control attributes defined at municipality-level or county-level simultaneously. This feature is specially important if a key attribute, such as households by size, is only available at the county-level.

The IPU procedure is shown in Figure 1. It consists on adjusting the set of weights for each household of the microdata to minimize the error between the control distribution and calculated distributions of each attribute, at each municipality. Therefore, the set of weights will vary within municipalities. The process converges after a variable number of iterations, usually under 500. 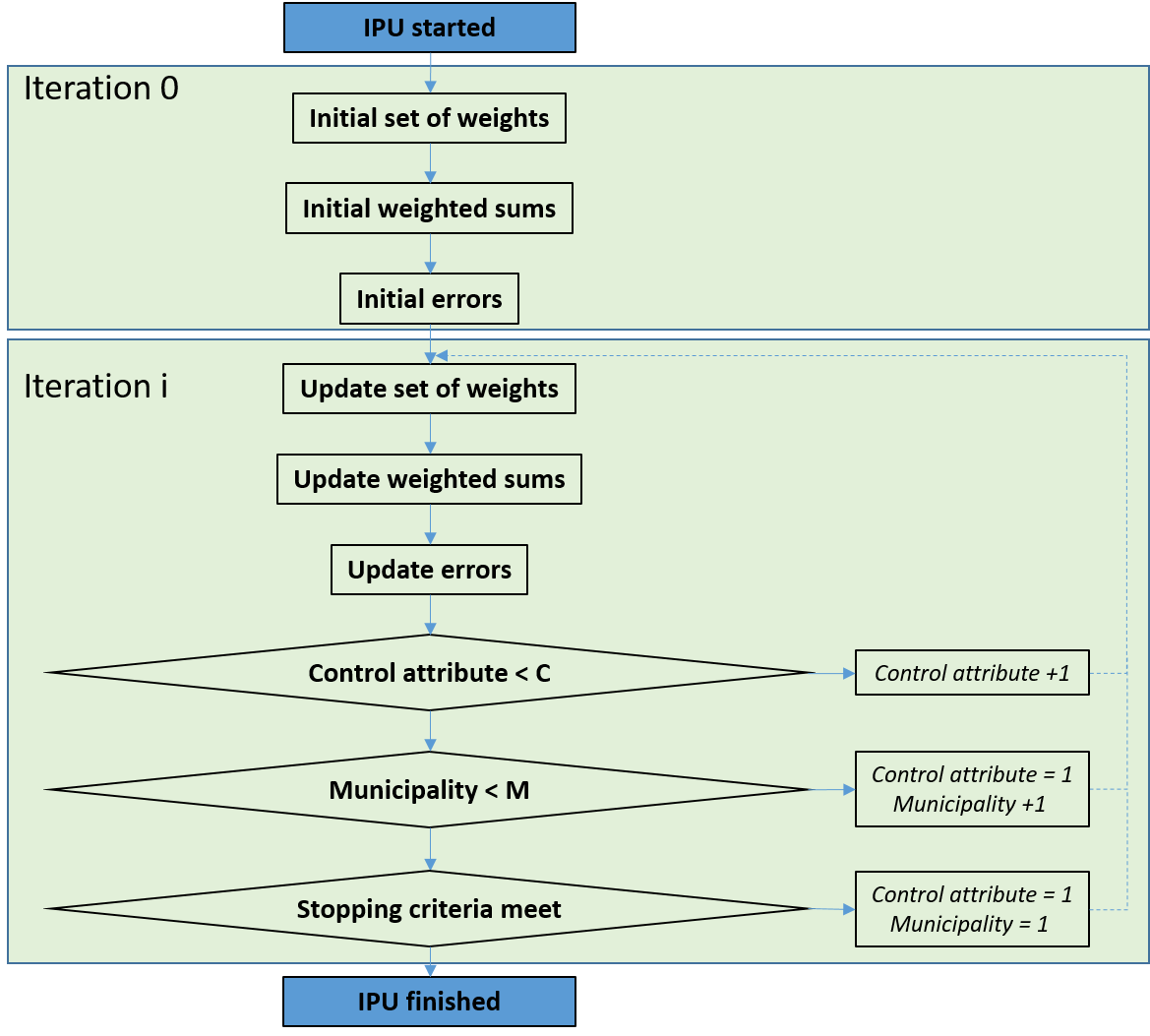 Initial set of weights is equal to 1. On the next iterations, weights are updated as:

Weights are updated after considering each control attribute. All attributes, regardless they are household or person type, are treated equally. After all control attributes are considered, we calculate the relative difference in absolute value between the constraint and the calculated distributions, for each attribute.

The goodness of fit of the set of errors is calculated as the average error (deviation measure value). This value is compared to the previous iteration. If the absolute difference of average deviation values between two full iterations satisfies a set of tolerance criteria, the IPU procedure stops updating sample household weights. The default threshold is set equal to 0.01% and can be modified by the user. Additional stopping criteria include the maximum number of iterations (default value equal to 1,500) and average error threshold (default value of 0.0000001).

Some modifications has been implemented on the IPU procedure to reduce computational time and memory consumption. Firstly, the user can decide whether to handle one geographic resolution or multiple geographic resolutions. The first option is preferred if all the attributes are at the municipality level, as in our case. Secondly, a collapsed version of the frequency matrix is used for each attribute. This modification minimizes the number of replications to calculate weighted sums and to update the set of weights, as it reduces the frequency matrix to only non-zero cells. Collapsed vectors (or sparse list representations) were previously applied by Pritchard and Miller in 2012; reducing memory requirements to 0.07% for the multizone approach on IPF procedure (iterative proportional fitting).

Generation of the synthetic population 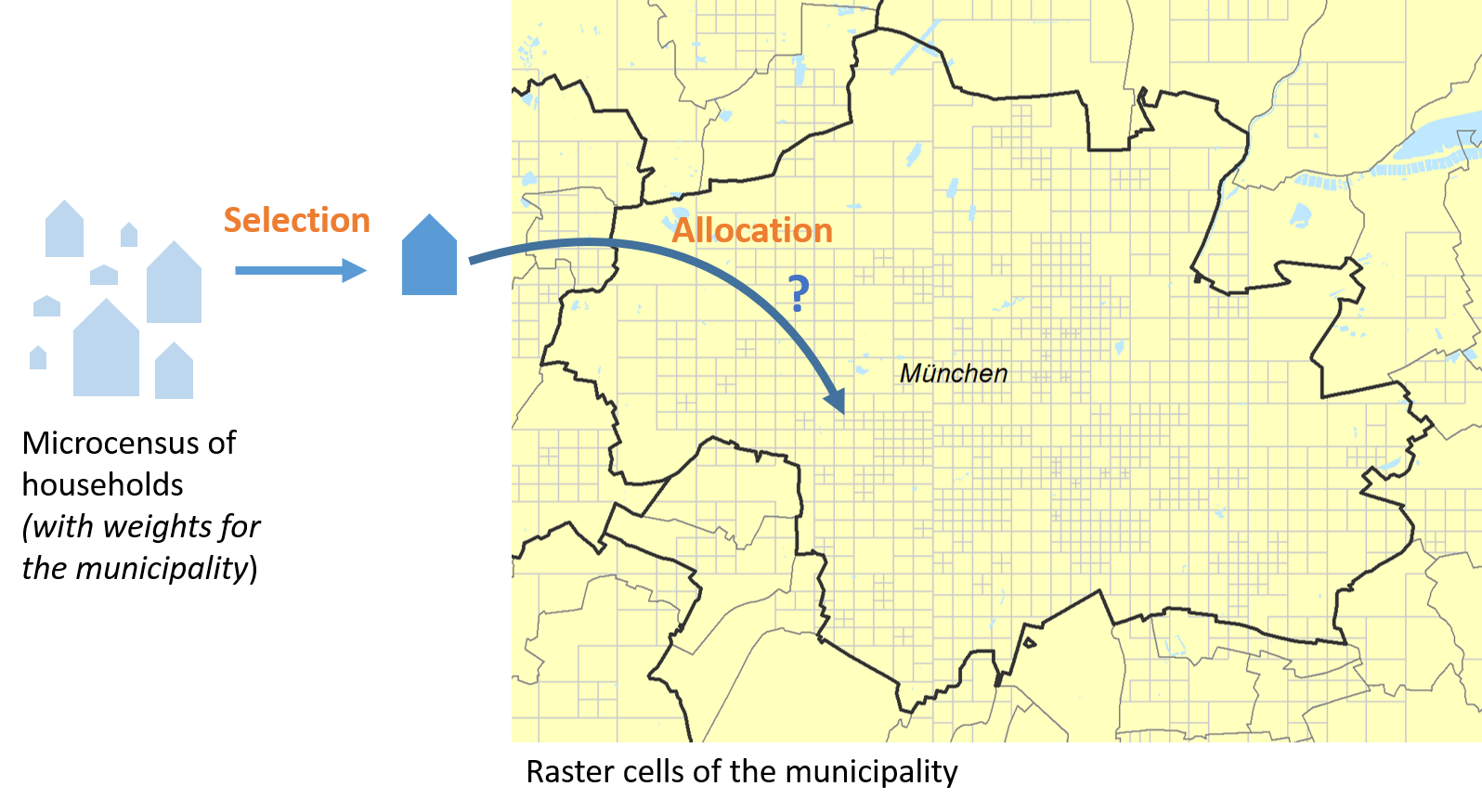 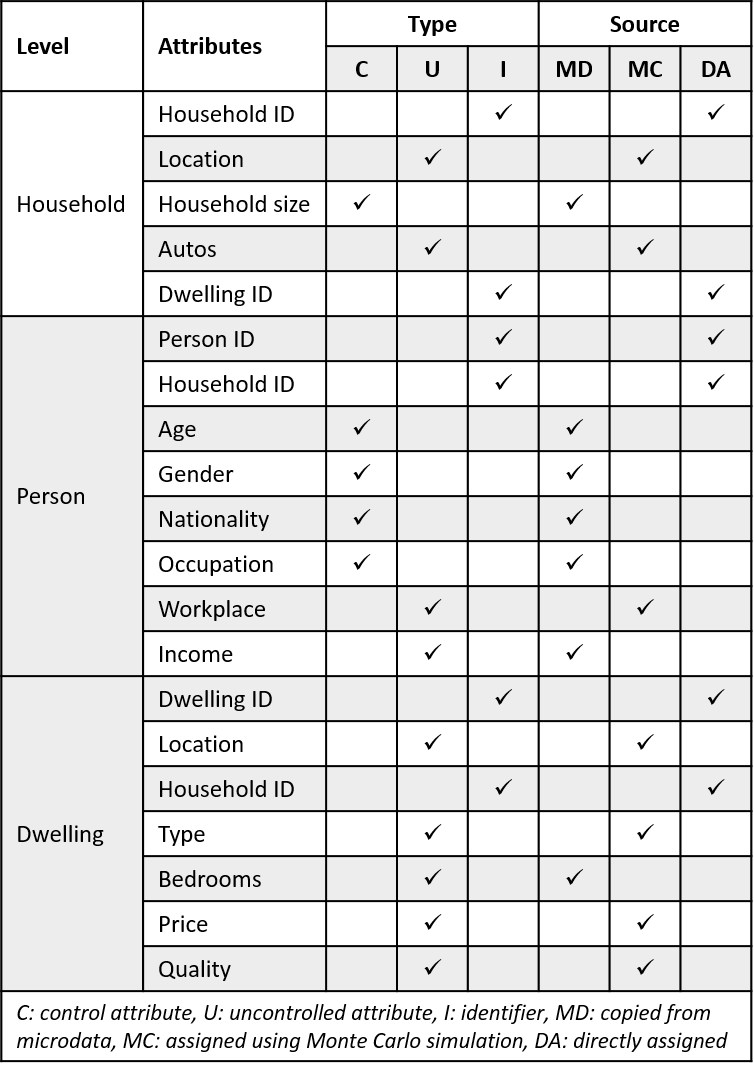 Attributes of each household can be controlled during the optimization procedure or uncontrolled due to lack of data.

Monte Carlo simulations is a technique that randomly draws one category of the variable based on the relative probability of the categories. Probability distributions can be copied from the aggregated values distributions or can be modeled based on microdata. For example, the number of autos will be modelled using the Household Travel Survey in Germany (Mobilität in Deutschland). The model for the number of autos will include household size, number of workers, household income and household location.

Control and uncontrolled attributes of the synthetic population are summarized on the table.

Finally, the goodness of fit of the synthetic population is evaluated. Each population synthesis will produce different results, given the randomness on households' selection. Goodness of fit is evaluated for each municipality as the average error of the controlled attributes.

A synthetic population represents line by line every household individually.

We have a census with microdata from 5 households, composed of one or two persons, who can be male or female. The total population has 13 females and 10 males, and 9 single-person households and 7 two-person households.

Population synthesis calculates the best combination of households from the microdata that is required to match the gender and household size distribution of the total population. In this case, the best fit is 5 households type 1; 4 households type 2; etc.

In the example, household 123456 is a single-person household inhabited by one female older than 64 years, unemployed.

Ye, X.; Konduri, K.; Pendyala, R.; Sana, B.; Waddell, P. (2009). A Methodology to Match Distributions of Both Household and Person Attributes in the Generation of Synthetic Populations . 88th Annual Meeting of the Transportation Research Board, Washington, D.C.

The frequency matrix is substituted by three matrices.

This approach saves computational time and memory for large frequency matrices with majority of zero-value cells.

For transportation modeling and land use analyses, spatial resolution must be higher than municipalities. Municipalities are usually divided in raster cells, where population and land use distributions are homogeneous.

We developed a gradual zoning algorithm to rasterize the Munich metropolitan area according to population and employment data. Employment was calculated based on land use.

Maximum resolution of raster cells is 100x100 m. Raster cells with lower resolution indicate that population and employment are more homogeneous at that area.

Boundaries of the raster cells respect the boundaries between municipalities.